Hello friends! I'm Diana - a small blogger. I have 2.5 years old. Unpacking toys and review Toys for me - the most favorite pastime. I love to travel, play games, I have a lot of toys. Together with my parents we shoot the video for children and vlogs to the Children's Channel ✿ Kids Diana Show. I am adding a new video every day!
On my channel you will find interesting videos for children: Unpacking toys, games and entertainment for children. With me you will see unpacking the most interesting new toys and Kinder Surprise, as well as playing with plasticine Play Before and other toys for girls. I'm doing a review of the known toys from the cartoon - Masha and the Bear, Fixiki, Luntik, Minnie Mouse, Peppa Pig, Frozen, Princess Disney, and others.
I also walk a lot in the entertainment center, on the playground, in the children's playroom. I will share with you the best moments of your life!
Also, go to channel my brother Roma!

Music from YT library and 286
#superpuperbbabybad 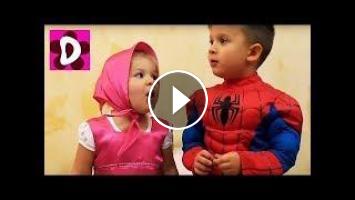